Until Ashlyn by Aurora Rose Reynolds

Dillon Keck knew Ashlyn Mayson was drunk when she suggested they get married. He knew he should have taken her back to their hotel room and put her to bed. Instead, he did what he had been craving to do since the moment they met.

Claim her as his.

Waking up married in Vegas isn't something Ashlyn Mayson ever thought would happen to her. Having Dillon, her boss, a man she thinks is a dick, insist they stay married is absurd, but every time he touches her, she gets lost in him and wonders if maybe they are meant to be together.

But someone isn't happy for Dillon and Ashlyn and their new found romance, and they're willing to do anything to keep them apart. Even commit murder.

I enjoyed reading Until Ashlyn. I felt that the characters had good depth, good story line. I did at times feel like there was a lot of characters going on and if you haven’t read the series it might get confusing. I can’t wait for what’s next!

Chapter 1
Ashlyn
“Hey, Mom,” I greet, tucking my phone between my ear and shoulder as I shove another dress and matching heels into my suitcase. I smile while I do, because Dillon will likely flip his lid when he sees my choices in attire for the weekend, but there is not one damn thing he can do about it since we won’t be in the office. So technically, his stupid rules don’t apply.
“Are you all packed?”
“Almost,” I sigh, looking at the clock and realizing I only have ten minutes to finish before my cab is set to arrive. I wasn’t planning on going to Vegas for the dental convention, but Dillon insisted he needed me with him, and like an idiot, I agreed.
“Is Dillon picking you up?”
“No, I’m meeting him there. His flight left a couple hours ago.”
“Oh.” She lets out a defeated breath. “Is it just you and him going?”
“I hope so. I swear if the Wicked Witch shows up, I’ll sell her on the strip to the highest bidder, or pay someone to take her out to the desert and drop her off,” I grumble, digging under my bed for my tickler—just in case of an emergency.
“Call me if you need an alibi.” She laughs, and I smile, shaking my head, because I know she’s not lying; she would find a way to be my alibi if something happened.
“I’ll call,” I mutter, heading to the bathroom so I can gather my shower supplies.
“Dillon’s so nice,” she says quietly, and I grit my teeth.
Dillon is annoying, bossy, and… fine, he can be nice sometimes. Plus, he’s uber-hot, but I hate him. Okay, I don’t hate him… but I really, really want to.
“How long are you going to be gone for?” she questions, breaking into my internal rant.
“Just four days. My flight gets back Monday night around seven.”
“Promise you’ll call everyday and check in.”
“I’ll call or text,” I agree, grabbing my cosmetics case from under the bathroom cupboard, filling it with all of my makeup.
“Please try and have some fun while you’re there. Make Dillon take you out to a nice dinner or dancing.”
Snorting, I mutter, “Sure, Mom. I love you. I’ll message when I land.”
“Okay, honey, and don’t forget your dad and I leave Monday for Florida and we’ll be gone for three weeks.”
“I haven’t forgotten. Have fun, kiss Grandma and Grandpa, and tell Dad I love him.”
“Will do,” she promises softly before I hang up and shove my cell into my back pocket. Looking at the clock I let out a quiet curse, getting my ass in gear to finish packing so I don’t miss my flight.
~*~*~ 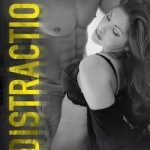